When my Uncle Peter called a few months back to invite us to his upcoming wedding I couldn’t be more thrilled for him to find love. My Aunt Mary died of pancreatic cancer 3 years at the age of 65 -far too young and her and my Uncle had always been an instrumental part of my life. As part of that trip Jeffrey suggested we visit Manhattan since it had a been a while and he wanted to visit the 9/11 Memorial Museum which opened 4 years ago.

As I reflect on the pain of September 11, 2001 our hearts were broken from the pain of losing so many Americans and the tragedy resulting then and today. The research is now stating that more lives will be lost from 9/11 from cancer and disease in those who were first responders than those lost on that tragic day. This wall with the colored squares – all unique – represent each person that died that day. 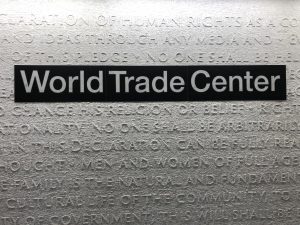 We took the subway to the museum and were asking a few riders where to get off. To our surprise the station before we were to depart was “World Trade Center.” We ended up being one of the first to get off at this newly renovated station which had been closed for 17 years. The beautiful white walls seemed to speak words of renewal and hope.

Going on the tour and walking through the museum was more than sobering. Being in California at some level I realized how terrible it was but seeing all the footage, the artifacts, the recordings and reading the stories made it more real in how much pain, suffering, evil and heartache this day caused. The detail for how it was designed, the integrity of how it was set up gives dignity to all parts of what transpired. 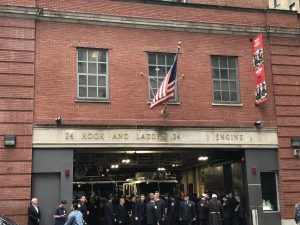 We left for the airport on the morning of 9/11 and as we walked to Penn Station we passed one fire station in which the firemen were dressed up for a ceremony about to begin to commemorate 9/11. I noticed tears in a few of the people we passed by. As we entered the train station hundreds of people were arriving for work and I realized how life moves on.

We have to remember the past, realize the loss, learn from it and then move on with our lives as best we can. That is what my Uncle Peter did. He was devoted to my Aunt Mary more than any husband could be, mourned the loss of her as they were married for 41 years, and then found love again. As long as we are a part of this life, holding the hope for love, health and happiness gives dignity to what we have now. Our lives are beyond value and my hope is each of you will treat each day with lifestyle choices that go along with the gift of life today.

Linkedin
Inositol – The Surprising Supplement for your Health Is Learning Motivational Interviewing Worth It?

Pulling for Values in the New Year

Fungi for the Future