Enjoying those French Fries? 3 Reasons to Rethink your Choice 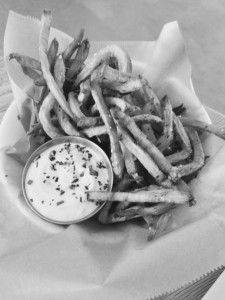 French fries are one of those foods I frequently hear about in my office. Although I never considered them a healthful food I found out a few years there are 3 reasons to avoid them unless you make them yourself.

1. Potatoes and Pesticides: conventionally grown potatoes have the most pesticides by weight than any other type of produce tested.

Many fast food chains use Russet Burbank potatoes, which are difficult to grow and take time to mature. Farmers use a pesticide called Monitor, which is so toxic that a farmer will not go outside after they spray it for 5 days. When the potatoes are harvested they are put in giant sheds the size of football stadiums because it takes 6 weeks to “off gas all the chemicals in them,” according to food writer Michael Pollen.

2. They are fried in inflammatory oils: fast food chains and restaurants use the cheapest oils to cut costs, usually soybean oil, an omega-6 oil associated with inflammatory properties versus omega 3 oils which are anti-inflammatory.

3.Oil changes are not frequent enough: most eating establishments change out their oil fryers 2-4 times per week.

If we add these 3 factors together: pesticides swimming in inflammatory oils for a few days it becomes a cesspool for starting a disease process.

Unfortunately many Americans eat them multiple times a day and we wonder why we have an epidemic of obesity and diabetes in our country.

It’s not hard to understand how Morgan Spurlock, who made the documentary Super Size Me, became dangerously unhealthy after consuming only fast food for 1 month.

Take Home Message? If you really want French fries make them yourself. Although the process of washing and cutting the potatoes and frying them in your own healthy oil (coconut is a good choice) is labor intensive, it can go a long way towards health. And make sure the potatoes are organic.

Note to my readers: And you thought I was going to talk about the carbs but this is one where the detrimental things in French fries go far beyond anything a carbohydrate can do but thanks anyway.

Linkedin
Healthy Finds for the New Year The Beta-Cell Bank: The False Sense of a “Normal Glucose”