Changing Health in the Middle East One Step at a Time 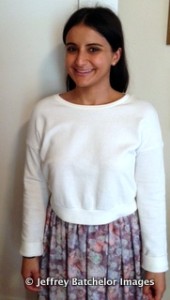 Almost 10 years ago I moved to the US from a small Arab country on the Persian Gulf called Kuwait. With a population of roughly 3.4 million, Los Angeles would be a much bigger region than my whole country. Growing up in Kuwait I lived a sheltered, privileged life mainly around Kuwaitis, not knowing much about the rest of the world.

In the spring of 2005 I got accepted to what appeared from the website to be a beautiful school called Pepperdine in Malibu, California. Having never been to California something inside of me took a leap of faith and a very long flight half way across the world. Naive, seventeen years old and quite shy it was a pretty brave move. Little did I know that would be the first of many brave decisions I have made in the past ten years.

When I started college a major in nutrition was not at the top of my list. Although I loved to eat, especially desserts, becoming a dietitian was not a common career choice in Kuwait.

I did have an experience with a “nutritionist” in my early years. Even though I was not overweight, my circles of friends were constantly striving for thinness and I started to subscribe to that as well.

Culturally it is encouraged to be very thin in order to be attractive for marriage purposes.

The nutritionist in Kuwait put me on a very low calorie low nutrient diet along with laxative chocolates and told me not to drink water. I had no knowledge this type of plan was completely irresponsible and damaging to my health since this was the norm in Kuwait.

This discrepancy in the Middle East shows a culture that revolves around food, to have an abundance as way of showing guests hospitality, all the while expecting women to be model thin.

After 3 years at Pepperdine I had switched majors multiple times and finally settled on nutrition, as I wanted to learn how to be truly healthy. I needed to change life long family and cultural habits.

My nutrition classes were tough but I learned so much and the knowledge the program gave me was a double gift of believing in myself and learning about true health.

The RD internship has been a rollercoaster of ups and downs but I reminded myself as I have in the past ten years of my heart’s true desire. My goal is to be able to help people live healthier lives both mentally and physically. Young girls do’?t have to starve to be beautiful, and they don’t need to get diabetes and heart disease as they age. Although there is a genetic component, we know illness can be prevented with diet and exercise.

I want people to enjoy this gift of life that we are blessed with and not be crippled by poor lifestyle choices. I want to take the knowledge I’ve gained to the Middle East; we are one of the wealthiest but also the most understudied populations in the world.

For a nation so rich in money we are so poor in health. My dream is to assist with change and shifting patterns towards better health.

The girl who came off the plane 10 years ago thought she had arrived at her destination- little did she know it was the beginning of her journey.

Linkedin
What We Say MATTERS: The Working Alliance Fasting Responsibly