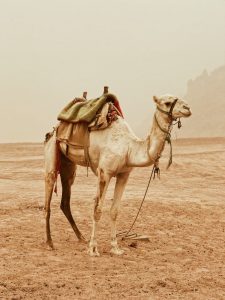 Have you ever ridden the really cool looking animal with the humps at the fair? Did you ever think that one day you would see camel’s milk sold at the grocery store?

Camel’s milk is consumed in parts of the world where camels are native to those countries such as Saudi Arabia, Kuwait, and India.

Recently we have seen increasing popularity of milk alternatives-almond, coconut, hemp, rice, etc. This billion-dollar market has given camel milk the opportunity to surface as another alternative. But does it provide special health benefits in comparison to cow’s milk or the other alternatives?

The table below shows the difference between 1-cup of raw camel’s milk and 1% low-fat cow’s milk:

Nutritionally they are similar in terms of macronutrients (carbs, protein, and fat). However, camel’s milk has a shorter shelf life and is beyond expensive compared to cow’s milk or other types of milk.

What is the research saying regarding camel’s milk?

So what?s the verdict?

Since the research is limited with small number of participants, the high cost of camel’s milk, and the possibility of food-borne illness and weight gain, it is difficult to justify recommending camel’s milk.

So if you are a Bedouin herder or own camel farms enjoy the milk, but for the rest of you we suggest you hold your camels.

Linkedin
Finding the Honey in your MI Practice! Stepping Up Your Exercise Game