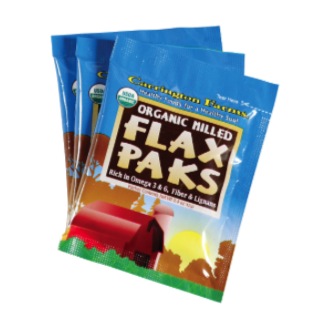 Remember those commercials about how a chia pet would enhance your life? While there has never been a flax pet, which seed is most beneficial for your health? If you could only choose “one”super seed which would it be – while both seeds are packed with nutrition, one is more nutrient-dense than the other.

Since the majority of processed foods we consume contain significant amounts of soy and corn which are high in omega-6 fatty acids, it’s no surprise then that the American diet is estimated to contain a 20:1 ratio of omega-6 to omega-3 fatty acids.

This skewed ratio limits the anti-inflammatory effects of omega 3’s to help with prevention of metabolic syndrome, diabetes, cardiovascular disease, Alzheimer’s, ADD and ADHD. To reverse this ratio and fully benefit from omega-3 fatty acids, it’s essential to increase our intake of them.

Breakdown: While both flaxseeds and chia seeds contain omega-3 fatty acids, flaxseed has “double” the positive ratio of omega-3′s to omega-6′s.

This fiber-like nutrient has powerful antioxidant qualities, which help create hormone stability in the body. Lignans are also linked to a reduction in cancer and heart disease.

Breakdown: Flaxseeds are the richest source of lignans in the human diet with 8x the amount as found in sesame seeds! The amount of lignans in chia seeds is unknown due to a lack of research.

Although the tests were done in a test tube rather than in human studies, the antioxidant values are still important as they demonstrate a general capacity of foods to function as antioxidants.

Breakdown: Although we usually associate antioxidants with fruits and vegetables, flaxseeds are one of the richest sources of antioxidants, specifically ones called polyphenols. Flaxseed is significantly higher in polyphenols than even blueberries.

On the ORAC list of the top 100 antioxidant dense foods and food products, flaxseed is number 32!

Though both seeds are nutritional powerhouses, flaxseed has more of the essential and non-essential nutrients than chia.  So Flaxseed is the winner!

How do you incorporate ground flaxseeds in your daily diet?

Buying ground flax seeds in a vacuum-sealed bag and keeping in the refrigerator or freezer is essential to preserve the integrity of the omega 3’s.

However, you can also buy single-serving? Flax Paks by Carrington Farms.  They are non-GMO, organic, milled and sliced flaxseeds so the essential oil is preserved.

The convenience of the individual vacuum-sealed packs means you can bring them with you anywhere and sprinkle on your yogurt, cottage cheese, smoothie, salad, vegetables, etc.

So perhaps for now it is best to leave the chia pet in the window sill as decoration, and bring your flax seed to work with you.

This blog was co-written by Susan Dopart, and RD intern Caitlin Schoensiegel.

Linkedin
Is It A Carbohydrate Issue Or A Fat Issue? Simplifying Prenatal Vitamins