Abundance and Scarcity in the Land of Eastern Europe 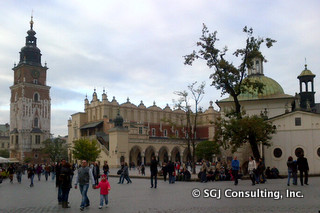 I am on my way home from attending a Motivational Interviewing conference in Krakow, Poland. Since I’ve never been to Eastern Europe it was a treat and an eye opening experience for me on many levels.

Bread and carbohydrates are big part of this country’s culture. On most street corners, vendors sell huge circular pretzels types the size of a very large bagel for 1.6 zlotys, which is equal to about 52 cents.

Krakow is one of the only European countries to survive WWII without much damage. It is beautiful architecturally in addition to being very scenic. We visited Schlindler’s Museum (remember the Steven Spielberg movie) and Auschwitz-Birkenau, the largest concentration and death camp in which more then 1.5 million people lost their lives.

Being here touched me on many levels – but particularly spiritually and psychologically.  I?m not sure I can articulate it all in a blog but I’ll do the best I can.

The Schlindler Museum is really more a history museum of how the Nazi German?s took over Poland.  I had no idea that the camps not only meant torture and death to the Jews but also to many Poles, Romanians, etc.

Auschwitz was beyond horrifying to see that level of cruelty, and nearly impossible to wrap your head around how the evil and atrocities in the camps and in Krakow could even take place in this world. I was struck by the dichotomy of what I was learning at the conference about free will and collaboration with having a client centered approach to assisting with behavior change and the dictatorship, lack of choice, freewill and any respect of human life and integrity at the camps.

The second dichotomy that struck me was how I live in the land of abundance and choice with respect to the food that I consume and how little choice, if any the people of war times had with what they consumed.  A short clip at the museum showed factory workers who received only an allotment of a roll and a cup of coffee per day – all things we would consider a small snack. The camps offered even less nutrition and even went so far as to conduct tests to see the effects of starvation on adults and small children.  Unimaginable!

One plaque at the Museum said:

There were several “local” stores in the Jewish Ghetto (a place of town which housed multiple Jews), which sold the legal rations of food.  The nutritional standard set by the occupying authorities for the Jewish people at that time oscillated between 250 and 300 calories daily.

I realized I have absolutely nothing to complain about. I have so much to be grateful for with the life I live, and the choices and freedoms I enjoy.

I have to wonder if bread is so important here since many times that was all there was to eat, and there was so little of it to consume. Even as I write this on a train to Warsaw my traveling compartment mates are all eating bread.

This trip offered me a chance to take home a more compassionate heart for all who suffered, and their descendants who carry the memories with them as well as an understanding of the importance of food and nourishment both in war times and abundance.

I know you were not there with me but the next time you are going to complain about your food or life, remember what you have and give thanks for your abundance.

Linkedin
Are you Weightist? Oatmeal, Cholesterol, and Insulin Resistance