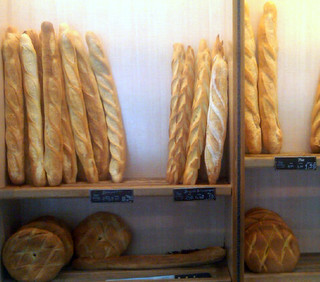 My recent trip to Europe for a “diabetes conference” made me once again think about the issue of wheat.

The fat-free era encouraged lots of grains, which was further promoted by the now obsolete Food Guide Pyramid, which recommended 6-10 servings of grains.

It seems like we are now in an era of each person trying to find out what they are supposed to do for their individual bodies. With so many ideas floating around from the Paleo, vegan, DASH diets, what’s the answer?

Let’s start with how our body processes food. Remember some of us are insulin sensitive and some are resistant.

The most glaring take a way from my conference was that those with insulin resistance have a carbohydrate sensitivity secondary to what is known as hyperinsulinemia.

And what is hyperinsulinemia? It is when your pancreas secretes an abnormally high amount of insulin in response to a meal, particularly one high in carbohydrates.

One researcher stated his studies indicate that those with type 2 diabetes have 9x the level of hyperinsulinemia in response to carbohydrates than those without diabetes.

Translation:  for those with diabetes (and/or insulin resistance) when you eat a slice of bread, your body responds like you had 9 slices of bread.

I have to wonder whether this high response is due to changes in wheat in America or worldwide but let?s get back to that.

One thing I hear on a daily basis from those who are insulin resistant is: “I don’t eat any more than any one else. So why can’t I lose weight?”

Here’s the answer:  you don’t need to be eating any more, and can in fact be eating less. If you have even 4-5 times the response of insulin to those who are insulin sensitive, your body stores fat easily.

Now back to the issue of wheat. With the recent publication of the book Wheat Belly, I am asked “what about this concept of not eating wheat?” The author William Davis, MD, states that the hybridization of wheat in America has made much of our population sensitive to not only gluten, but also the protein gliadin in wheat.

While I am not an expert in wheat, here’s one thing I know from my own experience and those of my patients. When I go to Europe I can eat bread and have no issues – no bloating, weight gain or increased hunger. When I eat bread here I have those issues. Is it due to my insulin resistance or due to the changes or hybridization in wheat?

It is probably a bit of both but I have to wonder if my underlying genetic insulin resistance is triggered and/or exacerbated by the differences in wheat, which does not get thrown off when I consume bread products in Europe.

The take home message: more will be revealed.

I think in the next 5 years we will have more answers.  For now, I avoid wheat in America as much as I can, and happily eat a slice or so of baguette in France.

If you have insulin resistance, consider what your body’s response is to wheat-based carbohydrates, and grains: if you are in the most insulin resistant group you could have the 9x response which can explain why you have trouble losing weight.

It might be worth a 6-week experiment to see if you feel differently, and/or have fewer issues with your weight, and/or less hunger.

We may not have the exact answer for years, but the solution lies in what response your body has to wheat and figuring out what works for your health and happiness!

Linkedin
A Recipe for Life: 4 Ways to Change Your DNA New and Healthy Food Finds at the Natural Foods Expo West