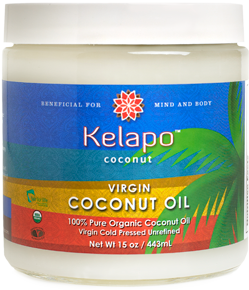 Remember the days of using to coconut oil to get a golden tan. Since those days are gone, is there a healthy purpose for this tropical oil?

While doing research on oils for A Recipe for Life I became an advocate for coconut oil, specifically extra virgin organic coconut oil since it is free of pesticides. Coconut oil is a saturated fat and was once thought to be a villainous oil to avoid.

Over the last few years that’s changed since it was discovered coconut oil contains a type of oil called MCT also known as lauric acid. Lauric acid has immune properties similar to those in Mother’s breast milk.

And since it is a saturated fat it does not change or become damaged at high temperatures or smoke points like olive oil. Having said that I’ve tried a few different brands of coconut oil for recipes like my Healthy Nut Mix and Cinnamon Lamb Chops.

At the Natural Foods Expo in Anaheim I ran across Kelapo coconut oil.  Since it takes me a while to try new things I shelved it for a while. This winter/spring I was on a baby bok choy/kale kick and currently I’m on a broccoli stage – can’t seem to get enough of it. Since I like my broccoli sautéed with a bit of a burned taste olive oil and butter do not work. So I reached for the new jar of Kelapo I’ve been saving since the show.

The result? A pleasant surprise at how “clean” the broccoli tastes with a truly amazing flavor I did not expect.?

It made the broccoli almost “pop” – both color and flavor.  And it does not taste like coconut.

If you want to sauté your veggies, a steak, chicken or fish instead of baking I would recommend trying some coconut oil for a change. In cold temperatures it can be solid but this time of year it is liquid. It is the same fat and caloric content of olive oil so use both of them as your recipes call for them – olive oil at low temperatures or in salad dressings, and coconut oil at higher temperatures/smoke points.

We’ve come a long way since sunscreen and I’m thrilled I finally found a new way to “tan”my broccoli this summer!

Linkedin
Easy Omega 3’s: Wild Salmon in a Can Being Insulin Resistant in the Land of Treats: Belgium Dark Chocolate and Waffles