Is A Gluten-Free Diet Really Healthier?

Have you noticed the abundance of gluten-free foods available at grocery stores or on menus these days? The proliferation of gluten-free products, along with the marketing of them, might lead you to believe that they are the new panacea to better health or weight loss.

So, what’s the real story? Will going on a gluten-free diet improve your health or help you lose weight? The answer is that it depends. Limiting your intake of gluten means you are cutting out many starchy, refined carbohydrates, and that in itself can help your weight and health. Eating gluten-free, however, is a must for those with celiac disease, who face real risks from ingesting gluten.

Gluten is a protein found in wheat, barley and rye products. Most cereals and breads contain gluten. Examples of gluten-free grains include brown or wild rice, quinoa, millet, buckwheat and amaranth.

What is not widely known about gluten-free products is that they still contain the same number of carbohydrates as their gluten-containing counterparts. In this regard, there is no health benefit to choosing the gluten-free versions.

The seriousness of celiac disease

So why avoid gluten in the first place? For those with celiac disease, their health demands it. Celiac disease is an autoimmune disease resulting in a true intolerance to gluten. If someone with celiac disease consumes gluten, it causes the villi, or little hair-like projections that move food through the gut, to atrophy. This atrophy can cause bleeding, malabsorption of nutrients and other health complications.

According to the National Institutes of Health, more than two million (or one in 133) people have celiac disease. However, only about 1 percent of the population has actually been diagnosed. To get an accurate diagnosis, you need a blood test and/or small bowel biopsy to determine if there is atrophy in your gut. 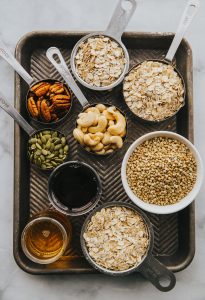 Research shows that another 39 percent of the population may be susceptible to having celiac or gluten intolerance/sensitivity. Some experts believe gluten sensitivity exists, but no research or tests to date are available for diagnosis. Symptoms of gluten sensitivity are diffuse, and can include headaches, fatigue or irritable bowel syndrome (IBS).

In addition, there is a small amount of research showing that gluten is associated with some forms of inflammation in the body for those with auto-immune diseases such as diabetes or Multiple Sclerosis (MS).

Many who go on a gluten-free diet may lose weight and feel better, but it has nothing to do with avoiding gluten. Just cutting out starchy, processed forms of carbohydrate or limiting carbohydrate intake helps with lowering insulin resistance, which leads to weight loss and improved energy.

If you have celiac disease, eating gluten-free is your only option. If you believe you have gluten sensitivity, going on a gluten-free diet is worth exploring. For the rest of us, there’s no need to follow the trends of what is currently in vogue with food manufacturers. Eating simple, unprocessed foods according to what your body can tolerate is the best way of eating.

Linkedin
Protein Bars – Portable but Healthy? Is Convenience worth our health?