Forks over Knives: Should I be Vegan? 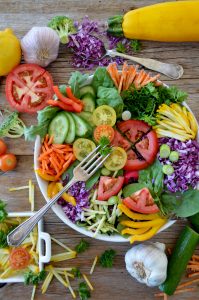 I was invited to see a screening of a new documentary coming to theaters in March 2011: Forks over Knives. I was intrigued by the title since it fit the philosophy of my practice: treat the cause, not just the symptom.

The makers of the film propose eating a whole foods plant based diet which sounds a whole lot better than our term vegan. I applaud them for their research on stressing the importance of having plenty of fruits, veggies and true whole grains versus what many vegans sometimes eat – a vegan processed diet – packaged processed foods that are vegan.

The two physicians in the movie, T. Colin Campbell, M.D. and Caldwell Esselstyn, M.D. go into detail about how a whole foods plant based diet can eliminate or reverse serious disease states such as heart disease, diabetes and cancer. Dr. Campbell cites much of his research is based on the China Study. The China Study is an epidemiological study (cause and effect or observational study). This is in contrast to a controlled study.

The film goes into great detail about the dangers of meat and dairy products and would cause many to run screaming from the theatre about the evils of animal protein. Pictures of fatty meat run throughout the film and are a strong deterrent to anyone ever consuming a steak again.

Let?s break it down – should I become vegan or not?

Since I am not a vegan I had to turn to the critique of the China Study to see if I needed to convert. To be honest, I was questioning my own diet since the film was very convincing.

These three links show inconsistencies in the China study and if you want to read the details they are below.

The critics found associations were not as represented and data was stretched to show animal based protein causes cancer, heart disease and other serious medical issues. In addition, the film authors advocate a one size fits all diet. This philosophy does not address different body types such as those that are insulin sensitive versus resistant.

I also came across this interesting blog written by a former vegan who went into such detail about the study it is worth a read if you so desire. Below is her conclusion.

If both whole-food vegan diets and non-Westernized omnivorous diets yield similar health benefits, this is a strong indication that the results achieved by McDougall, Esselstyn, Ornish, et al are not due to the avoidance of animal products but to the elimination of other health-harming items. Western diets involve far more than increased consumption of animal products, and for some groups?such as Alaskan Natives?a switch from a traditional diet to a Westernized one entails reduced animal food consumption, with the caloric void replaced by refined carbohydrates, hydrogenated oils, grains, sugar, and convenience foods.

The Western Diet has caused our problems – not specifically animal protein. To maintain your health eat a whole foods diet – organic fruits, veggies and healthy sources of protein; some grass-fed meat, pastured chicken and eggs, wild fish, nuts/seeds, beans/lentils; and balance with healthy fats such as avocado and cold-pressed extra virgin olive oil. Being flexitarian might be the key here.

This is not the “everything in moderation” mantra since that would include processed packaged foods. Stick to the periphery of the grocery store, buy as many of your foods at your local farmer’s market and eat foods that your great-grandmother would recognize.

The final take away message Forks over Knives stresses is the importance of filling up your plate with foods from Mother Nature – vegetables, salads, fruits, etc. since they fill you up and contribute to satiation versus processed foods which leave you hungry and unsatisfied. Filling our plates with colored produce not only benefits your waistline but contributes to health and longevity and hopefully those watching the film will hear that message.

Following this principle will change can change your life since your DNA will thank you and respond accordingly.

Linkedin
Beer Gut? Spare Tire? How To Bust Your Belly Fat Giving Thanks After Thanksgiving