What Oil Do I Use? 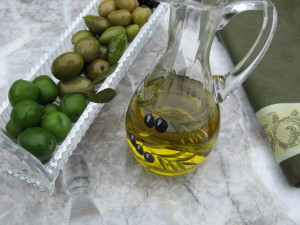 One of the questions I hear most frequently in lectures and with my clients is “which oil should I be cooking with?” This question turns out to be more complicated than you would think. Years ago, most of the population ate butter. Then, experts reported that vegetable oils were a much healthier alternative, and many people switched to corn or vegetable oils. This advice did not turn out to be true since weight, heart disease and diabetes have been rapidly increasingly. The good news is that research on which oils are healthy has become clearer during the last year. Choosing which oil to buy depends on the purpose – i.e. cooking versus using in salad dressing or baking.

Olive oil is a monounsaturated fat that is useful in making salad dressing and marinating vegetables and meats. If you are cooking with olive oil, only use it in recipes where the smoke point is between 200 to less than 400 degrees. The best olive oil is cold-pressed, extra virgin since it contains both the good monounsaturated fat and powerful antioxidants known as Polyphenols. This type of olive oil means the olives are processed within 24 hours of picking, which aids in retaining a higher quality product. It is slightly cloudy due to the small particles of olive flesh in the oil. Olive oil which is clear still contains the monounsaturated fat but is devoid of the Polyphenols. “Lite” olive oil is a marketing gimmick that just refers to a milder flavor, rather than less fat and calories.

Coconut oil is a safe oil to cook with at high temperatures since it is saturated and the molecules cannot be damaged. Organic coconut oil is best since it is free of pesticides.  Avoid high omega-6 oils such as safflower, sunflower, corn, and soybean oil.

Canola oil, although high in omega-3 fatty acids, has a high sulfur content and can quickly become rancid. It has been reported that baked goods made with canola oil can quickly develop mold. Due to the high level of rancidity, canola oil must be deodorized, and this process can increase the amount of trans fatty acids in canola oil, which negates the benefits of the omega-3 fatty acids that are present. In addition, since canola is the result of irradiated seeds from the oilseed rape, 80-85 percent of canola is GMO (genetically modified organism) and best to avoid.

The best oils to buy are cold pressed extra virgin olive oil, avocado oil, organic coconut oil, and to a lesser extent flax seed oil and other nut oils such as walnut, peanut or grapeseed.