What is Bisphenol A? 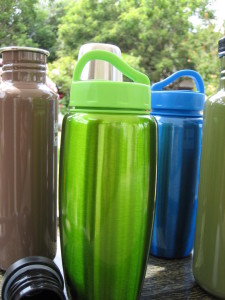 Until recently I had not paid much attention to Bisphenol A (BPA) but with the onslaught of recent studies I finally had to listen up.

What is BPA and how does it affect us? BPA is a chemical substance used to make plastics and resins or coatings on the insides of many food and beverage containers. It has been known to disrupt the endocrine system since it mimic’s the body’s own hormones (particularly estrogen) which can cause negative health effects.

After analyzing these studies I went on a search to find out if any of the plastics I used had BPA. I looked at my water bottle for the gym, my favorite peanut butter from Trader Joe’s, and everything else plastic in my house.

With a little research I found out what to look for. If a plastic has BPA it will have a “7” with a triangle around it and “PC” under the triangle, also known as polycarbonate (PC). Many plastics are “7” but do not contain PC. Many baby bottles have BPA in them so be sure to check those if you have an infant.

My water bottle had a 7 but no PC under it so I was safe there. One of the plastic water containers I use at home for drinking did have the 7 and PC so I tossed that but the rest were okay. My Trader Joe’s peanut butter was safe as were the rest of the plastic containers in my home.

So what about canned foods? This topic is controversial but from what I have read canned tomatoes can contain the highest levels of BPA, since they are lined to prevent the acid from leeching into the can’s metal.? According to consumer reports, canned green beans and soups have been found to have higher levels of BPA as well.

So what’s the take home message? If you have any plastics in your home and chances are you probably do, look at the bottom to ensure there is not a 7 with a PC under it. Cook with as many fresh foods as you can, and keep your intake of canned products to a minimum. It is not logical to eliminate canned foods from your diet but exercising caution is the key to preventing overload of BPA in your system.

Linkedin
HOW Much Exercise Do You Need to Maintain Your Weight? Obesity, Insulin Levels and Cancer?