Does a Dark Chocolate a Day Reallly Keep the Doctor Away? 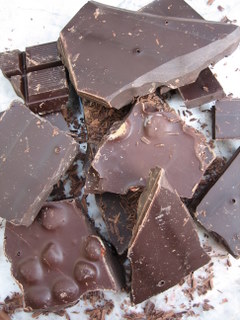 Many people think of dark chocolate as something their mothers used to bake with, but it has come a long way since that time in terms of texture and flavor. Many varieties of dark chocolate are on the market, with some tasting better than others. I myself was a big milk chocolate fan and when the research became clear that dark chocolate was the most advantageous I reluctantly transitioned myself over to the dark. However, after going over to “the other side” I am now sold on dark chocolate.

If you only like milk chocolate consider trying Dove Dark Chocolate Promises  they come in a nice bite size and 2 per day is a good serving. Experiment with tasting different ones. My current favorite is Alter Eco which comes in 85 and 90% at Whole Foods. Kallari has a rich smooth taste that I only experienced with dark chocolate I tasted in Switzerland. Choose ones that are greater than 70% cocoa since a higher cocoa content contains the most nutrients and the least amount of sugar.

Dark chocolate has been linked with lower inflammatory states in the body due to its high antioxidant activity. A 2008 study done with 5000 people linked a square or two of dark chocolate per day with 33 percent decrease in heart disease among women and a 26 percent decrease in men. The people in the study had lower levels of C – reactive protein, a marker in the blood that signals inflammation in the body.

It is recommended to eat 1/2 an ounce of dark chocolate per day for health – I’d say a recommendation most of us can live with  – and maybe not even a splurge, but a necessity!