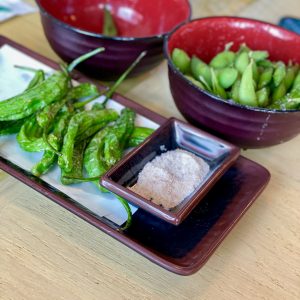 Following is an excerpt from my upcoming book due out later this summer:

Soy was virtually unheard of until the early ‘90’s except in infant formulas or for people with allergic reactions to cow’s milk. Many food manufacturers joined the “soy bandwagon” since soy appeared to be the latest health food. I remember attending the Natural Foods Expo in Los Angeles and noticing practically every food manufacturer was promoting foods containing soy!

Several years ago, I had to have a part of my thyroid removed. Soy nuts had become popular and I started snacking on them. After a few weeks, I noticed I didn’t feel well. Since that was the only change I had made in my diet, I discontinued eating soy nuts. Within a few days I felt like my normal self again. At that time, I had no idea soy could interfere with thyroid function. A few years later, the research began to appear stating the negative effects of soy on thyroid.

Soy is not the health food many advocate. The studies regarding the health benefits of soy are very conflicting. Soy has been touted as a cure-all for hot flashes, heart disease, and cancer, just to name a few. Soy is also known as a “phytoestrogen,” or a substance that mimics estrogen, which is significant, since estrogen can increase breast cancer in some women.

In 1999, two Food & Drug Administration (FDA) expert researchers on soy, Daniel Doerge and Daniel Sheehan, wrote an alarming letter to the FDA stating, “There is abundant evidence that some of the isoflavones found in soy, including genistein and equol — a metabolize of daidzen, demonstrate toxicity in estrogen-sensitive tissues and in the thyroid.”

Basically, they were stating that soy contains estrogen-like properties which can be harmful to many individuals and can also affect people with thyroid disease.

Despite this warning, the FDA approved soy as a “health” food and thus the soy craze began with manufacturers touting their products, from soy milk to soy bars, soy cereal, soy ice-cream, and so forth.

In Asian cultures soy is used as a condiment, rather than a “food.” If you compare the American food culture to what Asians eat, you would have to compare many attributes rather than just one particular food. Asian cultures use small amounts of miso, tempeh and natto (about 2 teaspoons per day), which are traditional fermented soy products versus the unfermented soy “foods” Americans consume (about 1-3 cups per day).

Fermented soy foods have been used throughout Asia since 1134 BC. However, they did not eat unfermented soybeans. A number of health risks which have been largely hidden from the public, are now starting to surface regarding the safety of unfermented soy.

Unfermented soy contains high amounts of phytic acid, which blocks the absorption of minerals and nutrients in the gastrointestinal track. Among these are zinc, copper, iron, calcium and magnesium. With fermented soy, the phytic acid has been neutralized during the process of fermentation, which cancels out the negative properties. Small amounts of phytic acid may not affect normal healthy individuals but can affect children and older adults.

Soy protein isolate (SPI) is a far cry from the natural fermented soy foods, such as tofu or soybeans. SPI is the powder that is in all the soy “foods” such as soy protein powder, soy milk, soy bars, etc. An interesting fact: many people think they are receiving calcium when they drink soy milk fortified with calcium. A few years back, it was discovered that the container soy milk was sold in absorbed most of the calcium, with very little left in the soy milk.

To make SPI powder, manufacturers take soybeans that are about 90 percent genetically modified, and mix them with a solution to remove the fiber. The soybeans minus the fiber are then dried at high temperatures to produce the SPI powder. At this point, the protein in the powder is denatured — or changed from its original form — which means the original soy is no longer a good quality source of protein.

This powder is in most soy foods. If you like the taste of soy and want to include healthy forms of soy in your diet, you may wish to purchase traditional fermented soy foods such as miso, natto, or tempeh. Other forms of soy are associated with the health risks mentioned previously.